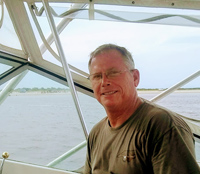 David grew up in the Carolinas and spent most of his adult life in the Wilmington and Carolina Beach area. He is a military veteran and spent 31 years in law enforcement from which he has retired from at rank of Major.

He started diving in 1979 and holds many certification in scuba. His favorite way to spend time is diving with his family and friends or hovering over a 5lb flounder just before spearing it.

He obtained his U.S.C.G. license in 2008 and has worked on various dive boats include the Hawksbill, which he co-owned along with Cape Fear Dive Center. 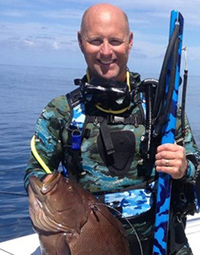 Keith grew up in Carolina Beach, N. C. working in his family’s charter fishing business. In 1985 he became a certified scuba diver and his passion for underwater adventures began. Owning numerous boats throughout the years he began exploring the shipwrecks, artificial reefs and ledges while gaining extensive knowledge about diving the Cape Fear area. Keith especially enjoys spear fishing having placed in numerous local spear fishing tournaments. In his spare time he builds and sells custom spear guns.

When not on the dive boat or working in the shop, he can be found piloting private jets for the world's largest fractional private jet company.

Terry grew up near Asheboro NC. Her passion and love for the ocean began and grew while at Carolina Beach on vacation. She received her Open Water certification in 2011 and her Dive Master certification in 2017. Terry has many dives in and out of the country but her favorite place to dive is at Carolina Beach. She volunteers and dives at the NC Aquarium. She has worked at Carolina Beach Scuba since 2015. One of her favorite things to do is to assist with Open Water Courses and to share her Scuba experiences with others. 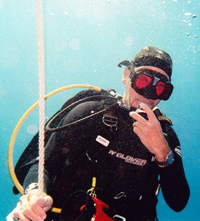 Rob and his wife Cindy aka "Lucy" moved to Carolina Beach in October 2017 and Rob started working in the Shop in November 2017. When not working in the Shop, Rob also works as a mate on the Shops 36' Dive Charter Boat, Search N Seas. Rob is a former Commercial hardhat diver and has 30 years of experience as a SCUBA Instructor. Rob is currently studying to take his exam for a USCG Captains license. When not working with Carolina Beach SCUBA, Rob enjoys going to the beach and being a volunteer diver at the N.C. Aquarium at Fort Fisher.